Zach Talks about Vampires
I’m a Black Dog and a sworn Charter Enforcement Officer.  For the uninitiated, the Charter is the set of rules by which all supernatural beings in the human world must abide.
Normally, my work involves keeping the werewolf packs in line but, occasionally, I am called on to explain the workings of the supernatural world to a person who has just been thrust into my world – a new werewolf, a witch who has developed too much power, that sort of thing. Almost invariably, I am asked about vampires.
I guess that makes sense. I hail from the dark forests of Romania originally and my homeland is rife with the legends of Vlad Tepes and his depredations. The real Vlad the Impaler was certainly a legendary character, and he did lead one of the most successful supernatural incursions to ever affect the world of humans. His story is an object lesson that we Charter Enforcement beings use to explain why there is a Charter.
First of all, you need to understand that the first rule of the Charter is that supernatural beings do not reveal themselves or the existence of magic to mundane humans.  A werewolf that shifts in front of humans is automatically a rogue and will be hunted down.  That sounds harsh until you hear the story of the vampires.
As I mentioned, Vlad Dracula, son of Dracul or the dragon, was a vampire long before he stepped onto the historical scene.  He lived well before my time – and I am over 300 years old – and abided by the terms of the Charter when he first came into leadership of the Wallachian vampires. His coven numbered well over forty and was one of the largest groups of vampires in Europe.
As per the Charter, the Wallachian vampires kept willing humans as blood donors and did not create new vampires unless one of their kind was killed by some misfortune or chose to expose themselves to the sun, the vampiric form of ritual suicide.
Vlad quickly became tired of abiding by the rules. The historical documents from our side say that he believed that humans were placed on earth as prey for the vampires. If the prey could not properly defend itself, then that was their problem.
Eventually, Vlad and his coven broke the Charter and other covens throughout Europe joined them.  The vampires began to hunt and kill humans at their pleasure, new vampires were made whenever it took some Master’s fancy and parts of Europe descended into a nightmare of fear, with humans huddling in their homes at night and praying for the dawn.
Of course, the Guild Warriors, Charter Enforcement for the wizards amongst humans, and other beings, like the Black Dogs, moved to stop the depredations but, in that time, there were more vampires than there were enforcers. We needn’t have worried.
It has always been said of humans that what they lack in strength or magic they make up for in numbers and technology. People in villages, towns, and cities all over Europe began to band together and hunt the night stalkers during the day. Entire nests of vampires were exposed to the sun or burned to the ground. Terrified humans relentlessly stalked, located, and staked any vampires they could find and then burned the bodies for good measure.
At night, when those vampires that had escaped the humans during the day walked the shadows, the humans banded together and fortified the communal halls where they slept with garlic, crosses, and holy water. If a vampire did manage to get in, the humans fought, using spears and pitchforks and overwhelming numbers to end the monsters.
Eventually, the humans managed to root out and stake Dracula himself, burning his body to ashes and spreading those ashes over a flowing river to be certain he never returned.  By the time Dracula came to his end, the covens were so seriously diminished that they fled into the deep forests of Europe and begged to be re-admitted to the supernatural community.
To this day, vampires serve as an example amongst our various People of what happens when the Charter is violated. 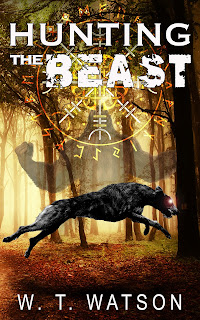 Hunting The Beast
W. T. Watson
Genre: Urban Fantasy
Publisher: Beyond The Fray Publishing
Date of Publication: March 5. 2021
ISBN: 978-1-954528-02-4
ASIN: B08Y76T3QF
Number of pages: 220
Word Count: 64,934
Cover Artist:  L Douglas Hogan
Tagline:  Werewolves, cryptid creatures and a protagonist straight out of the pages of lore!
Book Description:
An ancient evil stalks the Adirondacks…
A ghost hunter is faced with events she has never seen before…
A private investigator is not at all what he seems…
When Zachary Collins agrees to help the head of Buffalo Paranormal Investigations with a hostile haunting, he has no idea he will be immersing himself in the hunt for an ancient monster or that the monster may be hunting him.
Zach will need all of his skill, both magical and mundane, to keep his client alive and to survive Hunting the Beast.
Amazon

Stakeouts are not the most interesting part of my jobs but, on this night, the surveillance duty was alright. It was warm for an October night in Buffalo and Chippewa street was alive with a number of interesting characters. I took a sip of the hot Jamaican Blue I had picked up from the local coffee shop and scanned the street again, trying to parse a werewolf out of the crowd of students and young professionals moving up and down the street.

I’d been told by one of the local witches, a frequent information source, that she had seen a wolf that she did not recognize from the local pack at The Palmero, the local metal bar. Now, it was possible that Alonso Martinez, the Buffalo Pack Alpha, had inducted a new member but, if so, I should have been informed. I am, after all, the Buffalo Region’s Black Dog and I am responsible for enforcing the Charter, the laws of the Otherworld, on the werewolf population.

Whether Alonso was holding out on me or we had a rogue wolf in our midst, I needed to know about it so I had been watching the Palermo for several evenings, hoping to encounter the mysterious werewolf.

I had finished my third cup of coffee and was beginning to think that this night was a wash when I spotted the wolf. He had come around the corner from Delaware slowly. He was a young man of average height incongruously wearing aviator shades in the dark night. It was not the silliness of the sunglasses at night that cued me; it was the fact that as soon as he got close to the human crowds people formed an unconscious ring around him.

Humans have worked hard to become rational beings, to ignore the things that go bump in the night, but they have not evolved so far that they do not recognize a predator in their midst. The boy did not even have enough control to damp his inner carnivore so that he could mix with human society. That made him a rogue and my job now was to bring him in.

I exited the car slowly, conscious that sudden movement might alert the werewolf and moved across the street. Even an untrained wolf had uncannily sharp senses so I checked to make certain the wind was blowing in my face before moving closer to my target. I had dressed in black so I blended with the Goth crowd outside the Palermo until I was directly behind my subject. Speaking softly enough that nonhuman ears could not hear me, I murmured, “ Listen carefully and do not move. I know what you are. Stand quietly and I promise you that no harm will come to you . . . 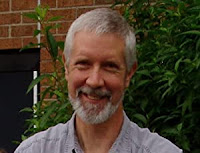 About the Author:
W. T. Watson is a coffee addict and writer of both fiction and non-fiction.  He infuses his work with his expertise in cryptozoology, monster lore, magic, Forteana and the paranormal. W.T. brings a unique shamanic and magical perspective to all of his work after over 30 years of exploration in these topics. When he is not writing or reading about monsters, he can be found outdoors allowing his dogs to take him for a walk around his neighbourhood in Kitchener, Ontario.  He lives with his spouse, Stacey, in a townhome that would be jammed with books if it weren’t for e-readers.
https://www.facebook.com/blackdog60
https://twitter.com/WTWatson2
https://www.instagram.com/curunir60/
https://www.goodreads.com/author/show/16154993.W_T_Watson 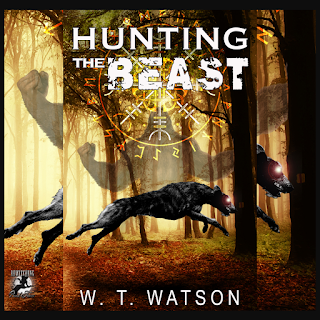 Posted by Roxanne Rhoads at 2:00 AM