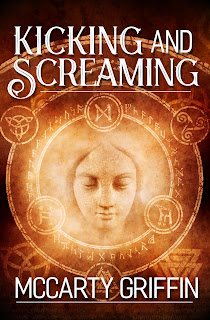 Kicking and Screaming
McCarty Griffin
Genre: Paranormal
Date of Publication: January 20, 2021
ISBN: 978-1-3012-1460-0
ASIN: B00FOD6QLK
Number of pages: 322
Word Count: 98, 373
Cover Artist: Joleene Naylor
Book Description:
Lacey DeLaney is dragged kicking and screaming into battling evil spirits and portals to other dimensions when she makes an impulsive bet with her best friends, Tish MacFarlane and Penny Elliot.
Together they face off against the nether world and each other on a wild adventure no reality show could ever have prepared them for.
Join this unlikely trio of ghost hunters, along with congenial empath Mary McDonald, on their wild ride through demonic mayhem and ghostly madness, where only the deep bonds of friendship they share can bring them safely through to this adventure’s shocking end.
Amazon

Excerpt from Kicking and Screaming by McCarty Griffin

A smothered scream from Penny grabbedher attention. She turned around and gasped at the spectacle of the front door of the Fergus house jumping out at them from Tish’ssixty-five-inch television screen. Penny stared at it over the hand she had clamped over her mouth.

“Holy shit,” Lacey croaked, wincing at the unpleasant tightening in her midsection. “How’d you do that?”

“Cool, huh?” Tish grinned at her. “HDMI cable. Let’s you connect your computer to your TV. We can relax on the couch or the floor while we check out the pictures, instead of trying to crowd around the desk and squint at the computer screen.”

In the middle of her gleaming walnut coffee table sat a cordless mouse on a pad.Tish made herself comfortable on the floor next to the table and motionedthem to join her. In her excitement, she hadn’t noticed their tension and Lacey decided to let it go for the time being. They could discuss Sid and his canine eccentricities later. As for her dream, well, she put no credence in dreams.She was more interested in what Penny had captured with her manic photo snapping.

Tish clicked the mouse and flipped back several frames to the first few pictures Penny had taken upon exiting the Subaru. Nothing struck them as remarkable right off hand. The house looked like any other old country house on the backroads of Monongalia County.When neither Penny nor she commented, Tish clicked to the next photo.

“What’s that?” Lacey asked, pointing to swirls of what appeared to be fog all around the house and front driveway. “I don’t remember seeing anything like that when we were there.Did you see any of this when you got that picture?”

“No, or I would have said so at the time.” Penny stared intently at the screen. “Is that what I think it is, Tish? Haven’t we seen this shit on those shows of yours?”

“Yeah. They call it ectoplasm. Supposed to be spirit energy manifesting. It’s a common phenomenon.”

She clicked the mouse through several photos of the front of the house. They examinedthem in silence, seeing nothing else unexplainable except the ectoplasm swirling and twisting in different patterns in each frame. She clicked again and they were in the entrance hall, which was clear of the mysterious fog, but dotted with several spheres of what appeared to be bluish white light.

“Jesus,” Tish whispered. “I know I didn’t see those when we went in. Those are orbs.”

“What are orbs?” Lacey asked. “I mean, besides the obvious reference to their shape, what are they supposed to be?”

“They’re supposed to be spirits,” Penny answered, surprising both Tish and Lacey. “Sometimes, you can see faces in them.”

For someone who in the recent past had expressed skepticism bordering on contempt for the whole ghosthunting genre, she sounded remarkably well-informed.

“Oh, okay,” she admitted with a self-conscious smile. “I did some online research today about taking pictures in haunted places and what to look for. I thought I needed to educate myself, especially after Sid’s nervous breakdown.”

“We’ll tell you later.” She grabbed the mouse and clicked to the next frame, which happened to be in the kitchen. Nothing looked out of place. “Let’ssee all the pictures first. Damn, I wish we’d gotten some video before we bolted out of there. What about the recording?”

“I finished it about an hour ago. We can listen when we get done with this. Give me the mouse.”

Without waiting for Penny to comply, shetook it from her and methodically moved through the pictures of the kitchen and a few through the window over the sink of the property behind the house, then a few more of the entrance hall as they headed for the stairway to seek the source of the first loud thump.

Tish stopped and pointed to a bright blue orb hoveringabout a foot above Lacey’s head. “Do you see that?” she asked in a hushed voice. “Am I imagining shit or is that a face?”

Lacey’s throat was too tight to speak. Those features looked familiar, evoking a memory of warm brown eyes beneath a shock of dark hair. It couldn’t be the same guy, she toldherself firmly. It was a coincidence orher brain playing tricks on her. She’d seen him today in the parking lot immediately after a traumatic event and now her brain, more disturbed than shehad first thought, was seeing his face everywhere.

Penny traced the outline of the face with a scarlet nail. “I could be wrong, but I think it’s a man. Young. He looks friendly. See? He’s smiling at us. I don’t recognize him. Do either of you?”

“No,” Lacey lied automatically. The face was too small to be sure who it was. Her imagination had decided to go into overdrive today and she needed to rein it in for the sake of objectivity.

“Me neither,” Tish said after another few moments of considering the orb. “He does have nice smile, though. At least as much as I can see.”

“Let’s move on,” Lacey urged her, not wanting to look at him any longer. “We have a lot more to go.”

“Okay. We can come back if one of us realizes who he is.”

Besides a few more orbs exhibiting no signs of facial features, nothing untoward showed up again until they reached the last photo Penny had taken through the open doorway before she had fled the porch.

“Holy shit!” Penny screamed without warning. “What the fuck is that?”

Shescrambledto her feet and backed away from the television screen, pointing at it with a trembling forefinger. An inexplicable gloom shrouded the steps at the top of the first staircase. Amid thehaze, perhaps two or three steps from the top, stood a dark amorphous figure, vaguely human in shape. From what might have been the shadow figure’s head, two red eyes glared at Penny as she unknowingly pointed the camera straight at it.

“Tish, I think you need to take this camera back to the store. It’s fucked up. It’s not taking good pictures at all.”

“There’s nothing wrong with the camera and you know it, Lacey.” Tish looked pale despite her naturally olive complexion. “I don’t know what that thing is looking at Penny, but this isreal picture of it, not a glitch. Something is in the Fergus house.”

She fiddled with several cords before sitting at her computer. Within seconds, their voices sounded over the sound bar beneath her TV.Lacey heardherself announce their presence in a self-conscious voice and give a running monologue on where they were moving next. Next came the clicking of the camera and the clacking of Penny’s heels, then Penny’s voice echoed in the empty kitchen.

Tish hit the pause button, staring atthem with wide eyes. “Did you hear that?”

“Maybe,” Lacey said cautiously. She thought shehad heard deep mumbling amidst the discussion about the room temperature. “Play it again.”

Tish rewound, going back too far, but Lacey didn’t mind. She needed to prepare herself to listen properly for the voice that had slipped in between Penny and Tish’s voices. It was so fleetinga moment of inattention might cause her to miss it.

Tish clicked the mouse so deftly, she cuther response off completely.

“Yes!” Pennysprung to her feet with eyes alight. “A man’s voice, something about the cold.”

“I can’t hear it very well.” Tish stared at the computer as if willing it to speak more plainly. “Sounds like he’s mumbling. What about the cold?”

“He said ‘it’s cold.’” Of the three of them, Lacey heard him the most distinctly. “Right after Penny asks you about the temperature in the kitchen, a man says, ‘it’s cold.’”

“He doesn’t sound evil, does he?” Penny said in a puzzled voice. “He just sounds like some guy standing there in the kitchen with us. Ooh, this is weird, isn’t it?” She hugged herself and said with relish, “Keep going.”

Tish pressed play again and they sat as still as statues whiletheir voices played back at them. Penny spoke again.

“You know Shelly? Did she send you here?”

The male voice wasn’t a murmur anymore, it was a shout. Lacey broke out in gooseflesh so stark it hurt, as if all the hairs along her arms had gone ingrown all at once. Tish didn’t hit the stop button this time and Lacey heardherself say, “Let’s go see.”

They heard themselves debating what to do a few seconds longer and then silence, punctuated by their footfalls. They were headed for the stairs to investigate the unexplained thumps.She tilted her head to listen closer. What was that noise filling the room? It was low and rough, rising and falling in an oddly familiar cadence she couldn’tquite put her finger on. Suddenly, she flashed on Miss Fizzy’s elfin features and knew what she was hearing. She nearly screamed right there in Tish’s brightly lit living room.

“That’s a growl!” She jumped up and backed away from the speakers. “Turn it off, for God’s sake! Something’s growling at us!”

“No,” Penny commanded, blocking the mouse with one outstretched hand.

“Shh!” Tish glared and smacked Penny’s hand away from the mouse. “Listen.We’re about to hear the first thudding noise from the top floor.”

Right on cue, the thunderous crash boomed from the speakers. Next cameher Scooby-Doo moment, which garneredher another scowl from Tish,andthentheir full attention was seized by rich, throaty male laughter flowing into the room from the speakers, spilling over and covering their bickering like a layer of warm caramel.

A second later, the speakers literally rattled with feedback from the force of the second crash from above and over their panicked retreat, theyheard a harsh voice whisper, “Come back here.” 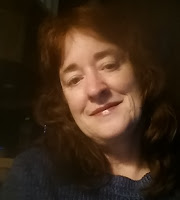 About the Author:
McCarty Griffin lives in the Pacific Northwest, at the foot of the Cascades, with her husband, two children and several nonhuman family members. She is a transplanted hillbilly, born in Texas, but raised in the hollows and hills of West Virginia where most of her works are set. She does not limit her creative efforts to any particular genre, although she does have a special love for horror and the paranormal she traces back to a childhood of Saturday nights eating Chef Boyardee pizza and watching Chiller Theatre with her mother. Before settling in to raise her daughter and son, she served in the United States Army, went home to earn her undergraduate and law degrees, and then practiced criminal defense law for more than ten years. One day she finally sat down and started writing, and she hasn’t stopped since. 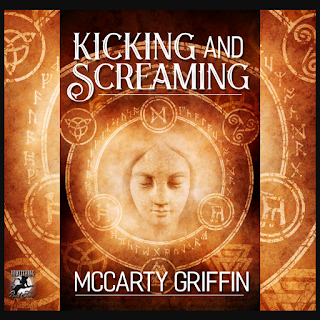