Chloe Winslow is the main character in HIS DARK MAGIC, Northern Circle Coven book 1. Though she grew up in an influential family of witches, she has recently struck out on her own and joined the infamous Northern Circle coven. This is the first Winter Solstice that she’ll be spending with them instead of her family. The holiday season always been one of her favorite times of the year. She loves the smell of Yule trees and hot mulled cider, and the music from all the different celebrations. Most of all she loves lighting the solstice bonfire and calling the sun back from the land of shadows. However, since this is her first time celebrating away from her family and their traditions, she has five special wishes that she hopes comes true.

5. Chloe’s looking forward to celebrating Solstice Night in the company of the entire Northern Circle, but she’s hoping at some point during December to spend a  quiet evening sipping some of the coven’s wine and watching Love Actually. She absolutely loves the movie and the holidays wouldn’t be the same without see it at least once. http://bit.ly/2pK9wL8

4. She’s also hoping that her new friends don’t mind if she plays Little Mix’s Love Me Like You (Christmas Mix) a bit obsessively. It’s not a traditional holiday song, but it makes her smile and feel like dancing. Besides, this year, she really feels like the luckiest girl as far as guys go. http://bit.ly/2QC6G63

3. Gift giving isn’t technically a part of the Winter Solstice tradition. However, her family always exchanged presents: homemade treats, cozy sweaters, special candles with herbs and flowers imbedded in the wax . . . She’s planning on getting Devlin a new shirt from L.L. Bean and a big snuggly toy for his Golden Retriever. She’s crossing her fingers that he’s been listening to her hints about how much she adores watermelon tourmaline and would love a new charm for her bracelet.  http://bit.ly/2CwPAn5

2. As far as holiday food goes, Chloe plans on making her family’s hot cider recipe and almond moon cookies. But there’s something else she’d like to enjoy on the morning after Solstice Night. The first night she spent with Devlin, she discovered that he makes an amazing cheesy bacon frittata. Not only did the frittata taste great, watching him cook it was pretty tasty as well. http://bit.ly/2ONQUrz

1. Top on her list—and this is actually a wish she knows will come true—she’s dying to check out all the local holiday events and see how other people in her new community celebrate the Winter Solstice.  http://bit.ly/2C2yNrc

You can see all Chloe’s wishes here, as well as Winter Solstice crafts and celebration ideas. http://bit.ly/2OGYOmH

If you’d like to learn more about the Winter Solstice in general here’s an interesting VPR broadcast. http://bit.ly/2ylHPfq 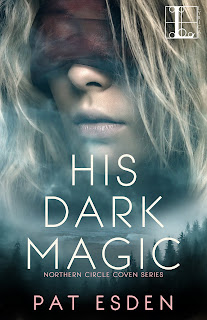 Tagline: Its power is legendary. It can fulfill every impossible magical desire. But for one young witch seeking redemption, the Northern Circle coven will challenge her skills—and her heart—beyond measure.

Its power is legendary. It can fulfill every impossible magical desire. But for one young witch seeking redemption, the Northern Circle coven will challenge her skills—and her heart—beyond measure.

One tragic impulsive mistake made Chloe Winslow an outcast to her influential magic family. As a medical student, she wants to combine science with sorcery to heal those she hurt and right her wrongs. But brilliant, charismatic Devlin Marsh re-routes her plans with a once-in-eternity offer: membership in the exclusive Northern Circle, a mysterious Vermont coven known for pushing the limits.

Enthralled by Devlin and their mesmerizing mutual attraction, Chloe makes a dangerous sacrifice to help the Circle’s high priestess awaken Merlin himself—and learn his timeless cures. But a foreshadowing soon causes Chloe to doubt the Circle's real motives, as well as Devlin’s . . .

Now Merlin's demonic shade is loose in the human world, while Chloe and Devlin's uneasy alliance will pit them against ancient enemies, malevolent illusions, and shattering betrayal. And with the fate of two realms in the balance, Chloe must risk her untried power against a force she can't defeat—and a passion that could destroy her.

Chloe padded barefoot across her apartment to the altar on her windowsill. She struck a match and lit a candle. Its light shimmered over a row of crystals and washed into the darkness beyond the open window.
“Spirits of air,” she intoned, holding out her hands. “Guardians of thought and intent, grant me your presence today. Spirits of fire, guardians of will and passion...”
A gust of wind sent autumn leaves whirling through the darkness and rustling against the window’s screen. She stopped chanting and cupped her hands around the candle, shielding it from the breeze. She shivered. There was a sense of foreboding in the air, a whisper and a chill that a witch like her could not ignore. Someone else with powers was close by. And they were thinking about her—at least that’s what her intuition murmured.
She glanced out the window. There was no one in the tiny parking lot, one story below. The windows in the house next door stood dark and silent. She caught a whiff of bacon and hash browns, but the smell was faint and not unexpected. It was almost five-thirty, breakfast time for the couple upstairs.
Quiet as could be, she tiptoed past her bed and a stack of textbooks to the studio apartment’s front door. She opened it a crack and glanced out. The hall light was on, its brightness fanning across the hallway between her and the main staircase. But the doors to the other two apartments on her floor were shut, everything dead silent.
Remembering her candle, Chloe swiveled back. “Out,” she whispered, flicking her fingers to send a burst of energy at its flame.
The flame obeyed, only a thread of its rosemary-scented smoke trailing behind her as she opened the door all the way and crept down the hallway, the hairs on the back of her neck prickling.
When she reached the top of the staircase, everything was still quiet. But after a moment, a faint thump-thump echoed up from the foyer below.
Thump-bang. Bang. Chloe froze, her breath knotting in the back of her throat. It was as if someone had leaned into the front door, hard shouldering it to see if it would give way. 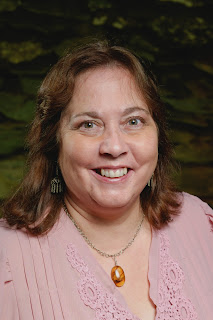 PAT ESDEN is an antique-dealing florist by trade. She’s also a member of Science Fiction and Fantasy Writers of America, Romance Writers of America, and the League of Vermont Writers. Her short stories have appeared in a number of publications, including Orson Scott Card’s Intergalactic Medicine Show, the Mythopoeic Society’s Mythic Circle literary magazine, and George H. Scither’s anthology Cat Tales.

Thank you for hosting His Dark Magic! Much appreciated.