A Ghost for Christmas Flash Fiction by Anne Roebuck

A Ghost for Christmas

Snow, like a pall of white crepe, smothered the trees and bushes.  Belinda looked out of her window and sighed.  It was Christmas eve again.  In the distance, she heard carolers singing.  “God rest ye merry gentlemen, let nothing you dismay.”
One year ago, her husband Chester lay dying, a fever wracking his withered frame.  He had been twenty years her senior and had been sickly for nearly all of their marriage.  As he slipped away, she had vowed she would never forget him.  And she hadn't.
But a year had gone by.  Her small millinery business had prospered.  She was an independent woman now, no longer the innocent girl she had been when she had married Chester.
And there was Daniel.
She really shouldn't be thinking of Daniel on the anniversary of Chester's death.  But Daniel had literally waltzed into her life last year at a New Year’s Eve ball.  The ball was held in an old warehouse that someone had desperately tried to decorate so that it didn't look like what it was.  She wasn't particularly a good dancer.  But in Daniel's arms, she had transformed into a graceful nymph, whirling around and around as the tiny orchestra played Strauss's Gold and Silver waltz.  She didn't care if they played out of tune or if the decorations were tattered and tawdry or the punch was watery and the cake stale.
All she saw was Daniel.
He was in his mid-thirties and handsome in a boyish way with twinkling eyes and a quirky smile.  But he had recently come back from the Spanish war, and there was an expression in his eyes, when he thought nobody was looking, that told her he had seen unspeakable tragedy and horror.  The first time she had seen it, it tugged so hard at her heartstrings that it nearly brought tears to her eyes.  It hadn't taken much else for her to fall desperately in love with him.
The year had whirled by like a Strauss waltz.  The seasons had changed, spring, summer and fall.   Now here it was winter again.  How she had changed in a year.  Then, a month ago, Daniel had asked her to marry him.   She had said yes before she even thought about it.
But there was still Chester.
She gazed out at the snow, her eyes filling with tears.  "I'm sorry, Chester," she said out loud.  "I tried to be a good wife to you, but Daniel ... "
Her throat tightened, and she couldn’t finish her sentence.  How could she explain to Chester what Daniel meant to her?  Chester hadn't been a bad husband.  He had treated her kindly and supported her in comfort.  But his constant illness meant that she had been more of a nurse than a wife.  It hadn't been his fault, but still ...
Chester hadn't been her true love, her twin flame, her soul mate.  Daniel was.
She turned away from the window and sat down on her bed, her heart heavy with … what?  Sadness?  Grief?  Guilt?  She wasn't sure.  Somehow, she had to leave the past behind and stop holding any more Christmas Eve vigils.  Would she still do it when she was married to Daniel and had a blazing Christmas tree, presents, pastries, mulled wine and possibly even children?
She shut her eyes.  “Chester,” she breathed.  “Forgive me.”
The clock on the nearby church steeple began to strike midnight.  A small gust of wind blew through the room, teasing the bed curtains.  The candle flame sputtered and went out, leaving the room in darkness.  Belinda froze in place, tendrils of terror crawling up her spine.  A light that wasn't from the candle glowed in the corner of the room.  A figure took form.  The figure of a man.
Chester.
He stood before her surrounded by a nimbus of light.  She knew deep within her that she was seeing his ghost, but he didn't look at all ghastly.  He looked young and strong as though his spirit had shed a frail and never-quite-right physical body and was now free.  She stopped being frightened and surprised herself by feeling happy for him.
He raised his hand and smiled.  “Thank you.”
It was only a whisper.  It could have been the breeze at the window.  but something inside Belinda knew it wasn't.  At last, she understood.  She had done him a service by tending him during his final illness.  But now he was free.  And so was she.
She smiled.  “You’re welcome.”
Then, he was gone.  She blinked.  The candle blazed again on the dresser.  The clock had ceased chiming.  Outside her window, she heard the voices of the carolers rising up from the street.  She rubbed her eyes.  Good Lord, what had just happened?   Had it even been real?
She frowned in puzzlement.  There was something on her dresser next to the candlestick, something that hadn't been there moments before.  She rose to her feet, walked slowly to the dresser and picked it up.
It was a white rose.
"We wish you a merry Christmas,” the voices sang.  “And a happy New year." 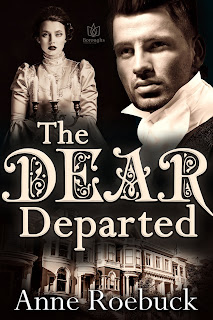 Young widow Virginia Paley has no interest in attending the séances at The Society for Eternal Love, but the women of the society are dying mysteriously in their sleep, leaving their fortunes to Professor Arthur Chadwick, its charismatic medium. As her aunt might very well become the next victim, Virginia will do whatever she must to ensure that doesn’t happen. She will even join forces with the darkly mysterious Jonathan Bradshaw, a man who isn’t what he appears to be.

From the moment he spies her, Jonathan is smitten. But romance is impossible.

Mrs. Paley is a respectable woman, and he himself is outside of society, an orphan, an ex-thief and a true wizard, able to hypnotize with a word and even separate his spirit from his body. No, he must instead remain focused on his goal, avenging his mentor’s death. But, facing a foe with power over demonic forces and Virginia’s very life in the balance, love might indeed be the only salvation. 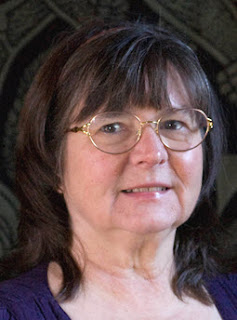 From her first poem at age 10 and her first short story at age 12, Anne hasn’t been able to help writing about her two favorite things—magic and love. An unrepentant nerd, Anne started out in biomedical research but ended up writing software manuals instead. She spent many years as a member of science fiction and historical reenactment groups and has been at various times a Renaissance scholar, a druidess, a pirate wench, a saloon floozy, a belly dancer and a chainmail-wearing warrior maiden.

Still, her first love is writing. It doesn’t matter whether the story is set in the Middle Ages, Victorian times, the present day or far in the future. If it has both love and magic, Anne will write about it. Anne also writes young adult historical fantasy under the name of Ann Finnin.

A native of Southern California, Anne lives in the hills above Los Angeles with her husband Dave, and a Dog of Indeterminate Breed named Rufus. 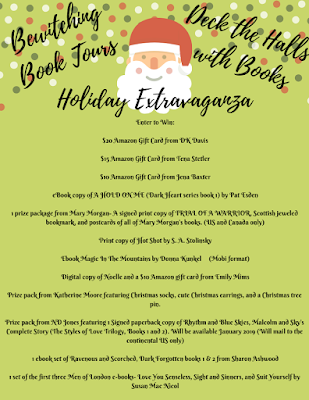 Email ThisBlogThis!Share to TwitterShare to FacebookShare to Pinterest
Labels: A Ghost for Christmas Flash Fiction by Anne Roebuck