1) TV show Moonlight staring Alex O’Laughlin before he was in Hawaii Five-O.  Besides having the handsome Alex O’Laughlin I liked how the vampire character was more relatable – and he was a private investigator.  This probably influenced my story to some degree.
2) TV Show Blood Ties starring Kyle Schmid and Christina Cox based on the novels by Tanya Huff (I loved the books too!)  This vampire is more a lover than a fighter, although he has no issue about killing low-lifes. It addresses Henry’s moral lines he has drawn to exist as a vampire. The chemistry between Henry and Vicky is great.  I also love the theme song “Live Forever” by Tamara Rhodes https://www.youtube.com/watch?v=yLhjYl50R6Q
3) TV Show Buffy the Vampire Slayer was historic and Joss Wheadon knows how to weave drama with humor.  It was more than teen angst, by far.  “Once More with Feeling” is great.  This was a show where the secondary characters became stars and fan favorites as much as Buffy.
4) TV Show Angel.  Although I liked Buffy better, Angel was good.  I liked it better once they brought Wesley in for comedic relief because the first season was pretty dark.  Although I would have liked it even more if the character Doyle could have stayed in the cast.
5) TV Show Vampire Diaries.  I tried the books and didn’t care for them at all, but the show was a master at plotting.  It’s hard to have a cliff hanger at the end of every single episode.  The writers of this show are the real stars.  And then of course there is Ian Somerhalder who plays the conflicted dark brooding vampire so well.
6) TV Show The Originals one word—Elijah! Claus is the central character but I’ll be honest, I watched for Elijah and his conflicted character.
7) TV Show Dracula (short lived) staring Jonathan Rhys Meyers really plays up the sexuality of the vampire. Jonathan Rhys Meyers was the epitome of a sensual vampire that would destroy anyone to get what he wants. This takes the original Bram Stoker concept and tosses it on its head.
https://youtu.be/leln00L5Wns
8) Movie Blade staring Wesley Snipes.  Unique concept of a vampire killing vampires and Snipes embodies the character.
9) Movie Bram Stoker’s Dracula (1992) staring Gary Oldman.  I have read the original novel and even seen plays adapting the novel.  Oldman shows us early on why he will win an Oscar eventually. Also stars Winona Ryder, Anthony Hopkins, and Keanu Reeves.  Of all the adaptations of the Dracula story, I liked this one best for a mix of acting and camera work.  There is only so much you can do with a novel written in 1897 for modern audiences, while keeping true to the original, but I thought this one did an admirable job.
10) Movie Van Helsing (2004) staring Hugh Jackman.  It isn’t stellar and seems to be all over the place with Frankenstein and werewolves thrown in, but Jackman took a flawed script and ran with it.  The original Van Helsing from the Bram Stoker novel was an older doctor and this transformed him into a handsome action hero. It was a little different take of Dracula as well. 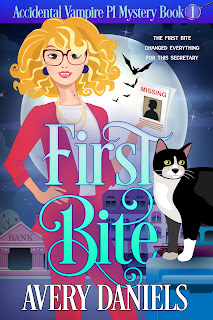 First Bite
An Accidental Vampire PI
Book One
Avery Daniels
Genre: Paranormal cozy mystery
Publisher: Blazing Sword Publishing, Ltd.
Date of Publication:  May 1, 2022
ISBN: 978-1-7355663-6-8
ASIN: B09XP9TS5N
Number of pages: 298
Word Count:  57,425
Cover Artist: Molly Burton
Tagline: What's a positive thought girl to do when she finds herself one of the undead? Recite plenty of affirmations and use those new toothy skills to assist her PI boss, of course.
Description:
In 24 hours, Misty Summers had the worst date of her life, was bit by a vampire, and her PI boss may close his business as he goes through a divorce. Looking on the sunny side, she decides to use her new vampire assets and become the investigator to keep her job and income. She doesn’t know what her future holds, but it can’t be any worse! When she starts following up on a missing woman’s case, she finds herself in the middle of murder. Even with her positive thinking and affirmations, she is finding her new reality daunting. But she vows to take a bite out of crime in her small lake resort town.
If you like Duffy Brown, Nancy Warren, Nova Nelson, Dionne Lister, Trixie Silvertale, and Leighann Dobbs, then you'll love this series with a quirky intelligent sleuth, small town lake setting, and tantalizing mysteries. Misty Indigo Summers is a positive thinking kind of gal and a most unlikely vampire and PI.
Buy these fun and clean cozy mysteries and start enjoying Misty's adventures today!

“I never want to see you again.”  I slammed the passenger side door. Roger sped off in his red truck, his dragging muffler sounded like a tray of silverware ground in a garbage disposal.  That ended the date from hell.  He took me to a cheap restaurant, we saw the budget dollar movie, and I had to pay for my own popcorn.  I can understand being on a budget, truly, I get it. But then to get all handsy in a parking lot, right under a parking light!  He had the nerve to get upset when I said no.  I had to slap him.  When he slapped me back, I elbowed him in his jewels.  The complete jerk.   There was a sickle moon hanging lazily in the sky and a cool autumn breeze rustled the gold and russet leaves.  I walked faster to warm up.  I hadn’t brought a coat since I’d expected to be driven.  A gust whipped my hair across my eyes and I swept it back.

I took a deep breath and wondered at the smell of autumn, the slightly sharp tang in the crisp air.  I wrapped my arms around myself.

The bright side was I stood up for myself and put an end to his assault.  Unfortunately, I’m stranded after eleven in a rougher part of town on a Sunday night with nobody around.  I wish I could strangle Roger’s pencil neck.  I can walk off my anger; we don’t have an Uber or such in the small town of Majestic.  I needed to recapture my positive vibes anyway, so a walk would do me good.

Another positive item to the evening was I didn’t spring for a new or previously owned dress for the evening.  It would have been wasted on the moron, anyway.  I wore my deep purple sleeveless turtleneck and black pants.  It was classic and more than he deserved.  My best friend, Courtney, had assured me this blind date would be different.  Oh, it was different, all right, and not in a good way.

I’ve never actually had a good date, not one single good memory of a date.  Tears stung my eyes.  Enough negativity.  I recited my mantra.  I am ready for the perfect man for me.  I am working on myself to be the person who will attract my perfect partner. After yet another disheartening experience, it’s all I can do to not blame it all on myself.  Nope, the right man is coming to me.  Yeah, okay.  I may be trying to convince myself more than attracting Mr. Right into my life.  I’m okay with that at the moment.

My low-heeled strappy sandals slapped against the sidewalk, an exclamation point with every step.  There wasn’t any traffic, and I had a couple of miles to go.  Other than my footsteps, it was quiet except for a dog barking in the auto salvage yard behind me. But I felt a presence and knew I wasn’t alone.  I sped up.  I was speed walking now and my heart pounded.  This really wasn’t a good area.  Majestic was a modest-sized town, just big enough to warrant two canines on the police force.  I didn’t want to find out firsthand about the seedy side of town.

Were those footsteps behind me?  I stopped abruptly. I heard a scuff, then nothing.  My senses screamed run, and even though my sandals weren’t the best for it, at least they were strapped on.  I grabbed hold of my purse strap to keep my purse with me.  I didn’t care how it looked; I took off running for everything I was worth.  My mind continued to yell, faster, faster!

One instant, it was a clear sidewalk in front of me, and the next I ran into a man who had just appeared.  My mind reeled at his abrupt materialization.  His eyes were strange; even in the dark, his eyes bore into mine.  I took my purse and aimed for his head. He moved so fast I barely saw a blur.  Next thing I knew, the guy was behind me, had pinned my arms, and was trying to give me a hickey!

Worst day ever!  There just is no positive way to look at any of this night.  I struggled, scratched, and kicked but was losing my energy quickly.  I remember slumping to the ground. I think he was still attached to my neck.  I wanted to keep fighting, but I couldn’t even stay conscious. 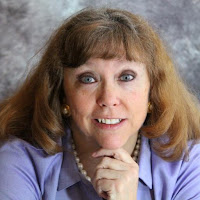 About the Author:
Avery Daniels was born and raised in Colorado, graduated from college with a degree in business administration and has worked in fortune 500 companies and Department of Defense her entire life. Her most eventful job was apartment management for 352 units.
She still resides in Colorado with two brother black cats as her spirited companions. She volunteers for a cat shelter, enjoys scrapbooking and card making, photography, and painting in watercolor and acrylic. She inherited a love for reading from her mother and grandmother and grew up talking about books at the dinner table.
Join her newsletter for exclusive news and offers: http://eepurl.com/c2DgfT
Website: http://avery-daniels.com/
Twitter: https://twitter.com/my_averydaniels
Facebook: https://www.facebook.com/AveryDanielsAuthor/
BingeBooks: https://bingebooks.com/profile/AveryD
BookBub:  https://www.bookbub.com/profile/avery-daniels
Goodreads: https://www.goodreads.com/Avery-Daniels
Amazon:  https://www.amazon.com/Avery-Daniels/e/B0719JXY83 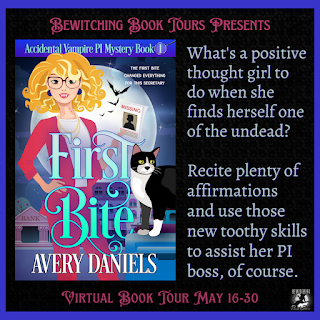 a Rafflecopter giveaway
Posted by Roxanne Rhoads at 5:30 AM

I agree with your top 10 and I enjoyed the excerpt, I can't wait to read First Bite, thanks for sharing it with me and have a spectacular weekend!