Whoever possesses the Great Library of the Underworld rules Hell itself…and threatens the destiny of both the Heavens and Earth. 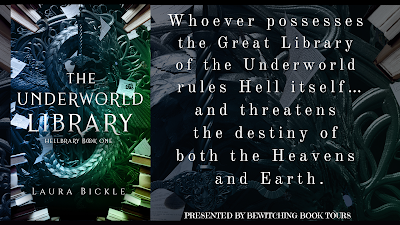 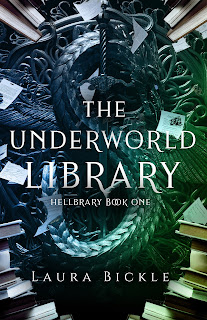 The Underworld Library
Hellbrary
Book One
Laura Bickle
Genre: Dark Fantasy
Publisher: Syrenka Publishing LLC
Date of Publication: 4/1/21
ASIN:B091JKK3CP
Number of pages: 304
Word Count: 90,426
Cover Artist: Pretty in Ink Creations
Book Description:
Whoever possesses the Great Library of the Underworld rules Hell itself…and threatens the destiny of both the Heavens and Earth.
The Great Library contains the most deadly magic tomes penned since the beginning of time. This magic is both wondrous and terrible, kept under lock and key by witch-librarians serving the king of the Underworld.
Eve is one of those faithful librarians. She doesn’t recall her life prior to the Hellbrary, and unlike her fellow Hellbrarians, she has very little magic to speak of. When a dangerous book is stolen, she must recover it with the help of a Gorgon librarian, a hellhound, and a mysterious shapeshifting royal envoy. This daemon, Azarr, has a serpent tongue and the heart of a man – can he be trusted?
King Caldrius’s court has fallen under siege. Caldrius’s cruel son, Ral, has returned from exile with an army to assassinate his father. But his father’s crown alone does not guarantee Ral the throne. He needs the library, and he will take it by force. His ambitions don’t end with the Hellbrary – he means to take Earth and the Heavens beyond.
Eve knows there’s only one way to defeat Ral: they must use the recovered book to awaken the Queen of the Witches. Caldrius imprisoned Viridia millennia ago when she grew too powerful to control. Then, he offered the witches a choice: serve him or die. They served, until now…but will awakening Viridia summon an evil greater than Ral?
Time is running out, and all the forces the Underworld must unite to wage war for the library and control of all of existence.
#DarkFantasy #FantasyBooks #KindleUnlimited
Free with Kindle Unlimited
https://amzn.to/3du2jXU

“I failed us all, my lady,” Stanna whispered at the cold effigy. The queen of witches slept in stone, and would sleep forevermore, all due to Stanna’s terrible failure to awaken her.

Stanna pressed her hand to the cold stone, but it softened and sloughed off, like frost from a tree in winter sun. To Stanna’s shock, Viridia’s chest rose and fell, and her fingers twitched around her helmet. The skin of rock covering her flaked away in soft plinks, like rain on gravel, peeling away from her armor.

The queen of witches opened her dark eyes and fixed them on Stanna. They were the eyes of owls, remote and shining. Stanna felt shadows behind her, the other witches, watching. She heard their gasps and strangled cries, but Stanna dared not shift her gaze away from the awakening before her.

“How long have I been sleeping?” Viridia asked her, focusing her gaze on Stanna.

“Has Caldrius granted me a pardon?” Her mouth worked around the words as if she didn’t believe them.

“No, my lady. Caldrius is dead. Ral has taken the Dark Palace with the Blood Ilk.”

She closed her eyes. “Have they taken the Great Library?”

She opened her eyes again, and they burned dark as the void. “Take me to the Library.”

The raven shrieked, and Eremiel followed the sound to its source, climbing up a tower to the topmost room.

He plunged into a round chamber full of women dressed in black. All were slumped and prone on the floor. They were loosely arranged in a circle, but had fallen as if they were trees blown back in an explosion. The shutters from the windows were blown open, and the meager furniture of the room had been slammed against the walls, broken.

Eremiel stooped to search for a pulse at the nearest woman’s neck. She was dead, cold, an expression of horror on her glassy-eyed face. Her ears trickled blood to the floor.

All of them, he realized, were dead and Nothing. As he waded through them, he reached the screaming raven. It perched on the shoulder of a young woman in the center, who was curled up in a fetal position on the floor.

Eremiel sheathed his sword and approached the bird with open hands. “It’s all right. I won’t hurt you.”

The bird stopped screaming, but it gazed at him, wide-eyed and panting.

Eremiel knelt beside the woman. There was no blood in her ears, and she was breathing shallowly. Her pulse beat strong in her throat, though her eyes were closed.

He looked down and saw Llythria’s ring on her finger. He’d found her, the lost princess of the Underworld.

But there was no kingdom left for her to rule.