Who's ready for the perfect midnight dessert?

•         To serve, remove the rim of the pan, loosen the cheesecake from the bottom, and slide it onto a plate

Top with lavender flowers, powdered sugar and drizzle with honey! 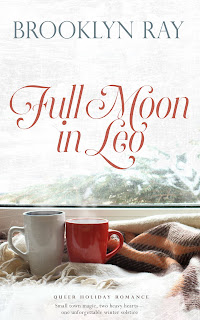 Full Moon in Leo
Brooklyn Ray
Genre: Queer Holiday Romance
Date of Publication: October 1, 2020ISBN: 9798681122579ASIN: B08H1P6X2RNumber of pages: 210Word Count: 65,000
Cover Artist: BookCoverZone
Tagline: Small-town magic, two heavy hearts—one unforgettable winter solstice
Book Description:
Cole Morrison left Jewel's snow-covered fir trees ten years ago. But after a disastrous family Thanksgiving, Jewel seems like the only place left to go. When a run-in with a gorgeous stranger leaves him with debt to pay, Cole’s escape from his past turns out to be much more than a lonely Christmas vacation.
Jesse Carroway, the local Jewel witch, has been running his family's successful, small-town Apothecary ever since his grandmother passed away. When Cole stumbles into his shop and accidentally wrecks a good portion of his inventory, Jesse does the only thing he can possibly think of—offers Cole a job and himself some help for the upcoming holiday rush.
Cole’s clumsy with candles and doesn't trust easily, but soon Jesse gets a peek at the guy behind his bad-boy reputation. As the nights lengthen toward Yule, Jesse wonders if magic is to blame or if Cole might've fallen into his life for a reason…
Amazon

Jesse sprinkled golden shards into the scrub and closed his eyes, imagining prosperity and hope and truth, the ingredients needed to solidify the spell, cocooning around each piece of salt. The spell shifted. Strengthened. Like a lock, the honeycomb sealed everything in place.

“Will that work?” Cole asked. He crouched next to the reassembled shelf, scratching idly behind Waffles’ ear.

“We package everything, tie a pretty bow around the jars, and put them out. Here, I’ll show you how to shelve product. Use the wooden spoons and scoop the salt into the jar. Fill it to…right about”—Jesse tapped the jar an inch below the top—“there.”

Cole followed directions easily. Every movement was slow, deliberate and precise, mirroring Jesse as best he could. Once they’d finished, Jesse showed him how to tie a bow around the lid with thin-cut burlap.

“I’m not great at this,” Cole said through a grimace, fiddling with a sad, droopy bow.

“Don’t think too much.” Jesse batted his hands away and undid the bow, retying it with practiced ease. “If you try to make it perfect it’ll look forced and…” He smoothed out the burlap, tipping his head back and forth as he searched for the right words. “Disingenuous. I mean, that’s pretty solid advice around here. Magic is messy and weird, but it’s honest. It never tries to be something it isn’t. Same with candle making and bath bombs and everything else. Don’t dwell on making your gift wrap look exactly like mine, just do your best to make it pretty.”

“I don’t exactly know how to make things pretty, Jesse.”

Jesse tied a bow, a little crooked, but good enough. He untied it again and handed the burlap to Cole. “Try again.” Cole held the ribbon so tight his hands quivered. Jesse could almost feel it—bones apprehended, too tense and strained to do any good. “Okay, hold on. You’re, like, ridiculously tense.” He heaved a sigh. “Can I try something?”

Jesse pushed the packaged jars aside and placed the stone bowl on the counter between them. He glanced over one shoulder. Then the other. There. He snatched the water bottle. “Can I see your hands?”

Cole didn’t move at first. His jaw flexed. Caution flared behind his eyes. Jesse waited, nodding from his open palm, dangling over the bowl, to Cole’s, twitching on the counter. His hesitation remained, even as he unbuttoned his cuffs and let Jesse take his hand.

Carefully, Jesse smoothed the leftover salt scrub over Cole’s knuckles, pulled one hand closer and pressed his thumbs to the center of Cole’s palm. Like this, guarded and entirely human, Cole gentled. His shoulders relaxed. Tension drained from his fingertips. Jesse focused on his hands, each one, pushing and kneading while Cole stood entirely too still, attention fixed on him.

The apothecary went quiet. Sometimes pressing trust through skin held more power than smiles or stories. As he worked the salt into Cole’s calloused hands, Jesse realized he probably hadn’t been touched this tenderly in a long, long time.

“Do these mean anything?” Jesse traced the edge of the koi fish tattoo on his left hand. Laced their fingers. Squeezed.

Cole’s throat bobbed when he swallowed. “Apparently they bring good fortune. Figured I could use some of that.”

“And this one?” He took Cole’s other hand, touched the wolf on his forearm, then went back to massaging the base of his fingers.

“I’ve been a lone wolf since I was young.”

Jesse wanted to read his palm. He wanted to map Cole’s past and future, find where his heart line met his destiny, just to test the universe. Is this a coincidence, he wanted to ask. Is there even such thing? He poured water over Cole’s hands and washed the scrub away.

This time, Cole’s hands moved fluidly, pulling a pretty bow into place. He smiled at the jar. Pride looked good on him. “Did you cast a spell on me?” he asked, grinning.

Jesse’s stomach fluttered. Don’t blush. He aimed his laughter at the ceiling and shook his head. Don’t you dare. “Not yet.” He reached for the keys in the drawer below the cash wrap and twirled them around his finger. “See you tomorrow?”

Cole’s brows twitched and his lips parted, but he cleared his throat and nodded. “Yeah, I’ll see you in the morning.”

Jesse wanted to ask him what he’d planned to say—what he wanted to say. “Goodnight, Cole.”

Cole knelt to pet Waffles before he shrugged on his jacket. He tossed a smile over his shoulder, footsteps crunching through snow on the sidewalk.

Jesse let out a deep breath. He glanced at Waffles, who sat on her haunches, staring back at him.

“Don’t look at me like that,” he whispered, and rolled leftover salt between his fingers. 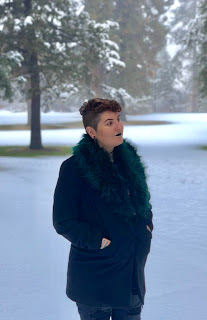 About the Author:
Brooklyn Ray (they/them) is a fan of fresh brewed tea, long walks through the woods, and evenings spent reading sexy books. They write Queer Paranormal Romance and Erotica about witches, necromancers, and other magical creatures, and moonlight as a tarot and palm reader in the Pacific Northwest.
Find them on Instagram @brooklynrayauthor
https://www.instagram.com/brooklynrayauthor/
https://www.goodreads.com/author/show/16971356.Brooklyn_Ray 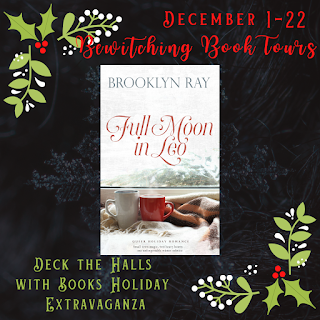 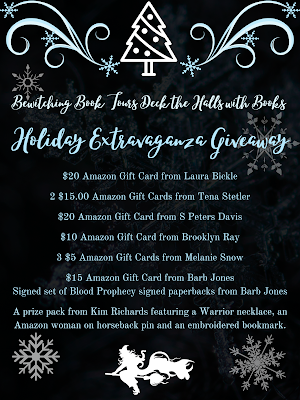