Darkness grows all around,

As the woods echo with haunting sounds.

On the pumpkins the frost does lay,

And in the cemetery mist covers the graves.

The wolves howl at the bright full moon,

Filling the air with their spooky tune.

Witches, their cauldrons they do stir,

Looking for candy and other sweet treats.

The Vampires, Ghouls, and Goblins give fright,

As all gather to celebrate Halloween Night. 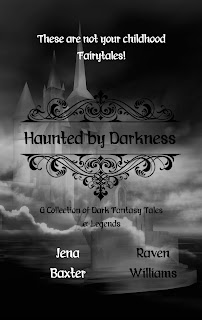 These are not your childhood tales!

Haunted by Darkness is a collection of eight Dark Fantasy Tales and Legends from the minds of Jena Baxter and Raven Williams. Experience the Darkness as you step further away from the Light.

Fall into Darkness, A Realm Jumper Chronicles Origins Story:
The darkness within brings a great downfall.

Rise of the Dark Witch, A Realm Jumper Chronicles Origins Story: Sometimes a person is beyond redemption.

Witch Hunter Ordained, A Witch Hunter's Society Origins Story: Will his dark deeds end when vengeance is had?

Belshazzar: The Gods rest in eternal sleep while their appointed Guardian for men and supernatural creatures is going mad.

Eyes of the Gods: A lonely phoenix returns to his home in Misty Haven to die, until he hears a song that cuts to the heart of his being.

Children of the Moon: Tormented by dreams and exhausted, Raven is sent to live with her aunt where she is lulled into a dreamless sleep by a haunting melody.

Hunted: Cursed by the Queen of Fairies and hunted by men, Darla must find true love or remain a deer forever.

Chapter 1
Victorian London
Lucien closed his eyes and tucked his violin under his chin, placed the bow to strings and began to play. Long notes with a bittersweet edge embodied the atmosphere, like a ship floating, lost, its crew and sails forever lost at sea.
A door slammed in the background, and something heavy pounded the floor. Lucien's eyebrows knitted in frustration, as a discordant note sliced through the illusion he created. He placed the instrument on an end table, and stormed out of the library, into the parlor.
His brother, Edward, stood near the entry, loosening his cravat. He nodded. "Lucien."
"What are you doing slamming into the house like a herd of elephants?"
The material slid off Edward's neck, and his lips curled into a pout. "Annabelle has decided to marry Merrill Brighton," he said, with a huff. "That leaves me starting over, or marrying Winnifred Camden."
Lucien didn't think Winnifred was so bad. She had a few love handles, but that just added to her personality somehow. His brother on the other hand, wanted someone with riches and popularity. Lucien frowned and shifted. "What does that have to do with your conduct? Please settle the affairs of your love life without tearing down the house? Even Winnifred won't want a man with a poor disposition."
"Easy for you to say. Ladies hang on your every word." He smiled, "Or should I say note?" He sat at the piano, and ran his hands over the keys. Soft sounds poured into the room like a whisper.
Lucien sighed, and pulled his coat from the rack. While he loved his brother's piano, he wanted to play violin and he couldn't do it with the other music in the background. "I'm going for a walk."
"Shouldn't be out alone tonight," Edward said. "The moon is full, and it's children will roam seeking their next meal, as the night wears on."
Lucien scoffed. "Fairytales written to frighten children. Don't be absurd."
Edward laughed, and the door slammed shut behind Lucien. Not that he was angry, he understood Edward's frustration. A gentleman needed to find a woman of wealth to settle with in order to live in comfort, unless he had a fortune of his own. Lucien didn't worry about such things. He would rather spend his time making music. Everyone fell into the hands of destiny anyway, the cards would fall where they wanted, changing the course of a man's life, and shaping his future in ways he never dreamed. A pleasant chill climbed up his back. Where would his music take him? Would he be able to perform in great halls, or be forced to settle with a woman, warming a bed and creating babies for her comfort?
The moon hovered bright over the city, and sparkles of light danced on the surface of the Themes. Lucien stopped to watch, breathing in the cool night air. His favorite kind of evening after a warm, summer day. Frustration rolled off his shoulders in waves. He began to relax and continued on his way.
footsteps shuffled behind him. He stopped and glanced back. Nothing but the moon and it's shadows disturbed the darkness of night. A bird screeched overhead, and he jumped, as he resumed his walk. The footsteps resumed when he continued walking. When he stopped again, they did too. Could there be something to the moon children myth? Goosebumps covered his skin as he turned and squinted to see better, but there was still only darkness. He took a deep breath and shrugged the tension out of his shoulders. He was being foolish.
The shuffling stopped when he turned toward the city, and soon he wondered if it had been the work of an over-active imagination. His anger giving rise to the absurd. His shoulders dropped, and he relaxed, as new threads of music filled his mind. He hummed them as he walked, until the shadow of a man came into view up the lane. Lucien tensed, was someone waiting for him? He turned left at the corner, but moments later, the silhouette stood waiting once more. He turned again.
It had to be someone else. No one could move that fast. How many people were out this evening? Maybe it had something to do with the moon. His brother's words echoed in his mind. He turned again, and shuddered when he saw the silhouette of the man waiting.
Lucien's heart raced. He spun and jogged back the way he came. In seconds, the silhouette blocked him, but this time it was closer. His chest tightened as the man moved toward him, his stride like a feral cat. For a moment, all Lucien could do was stare.
Lucien broke the spell, spun around and ran. The chest he crashed into was solid as cement. Muscled arms encompassed him. He kicked his feet and twisted, but the man's grip tightened.
"Don' worry," a smooth voice crooned.
Lucien shuddered.
"We'll be done in just a few minutes." 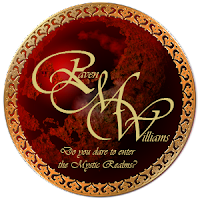 About the Author Raven Williams

A prolific writer, Raven began her career in 2010 with a blog and non-fiction, then moving to fiction in 2014, when she began Elven-Jumper, the first book in the Realm.

Jumper Chronicles. She now has 30 books to her name, spanning the Realm Jumper Chronicles, Raven’s Twisted Classics, and the Demon Stones Saga, as well as her non-fiction, with more planned.

When Raven is not writing, she is creating art in the form of abstract paintings, fractal designs, and jewelry pieces that tie into her stories. She is also a caregiver for a disabled family member and two cats. She physically resides in the Northwest Florida Panhandle, but spends most of her time mentally in her Mystic Realms.

Will you join her?

About the Author Jena Baxter


A prolific writer, Jena Baxter creates characters with depth and stories filled with action, emotion, and a little bit of romance. She loves building fantastical worlds and cultures.


Living in Northern California with her husband, Jena enjoys soapmaking, her pets, and writer's conferences. She also reads for a screenwriting contest on an annual basis.

Posted by Roxanne Rhoads at 2:30 AM