Character Confessions
Somebody needs to tell Donnette Smith that I’m not a happy character. I’m Jenna Langley by the way, and you wouldn’t believe the terrifying ordeals she has put me through.
In book 1, Killing Dreams, she decided to turn my clairvoyant abilities into a fight for my life. That’s right. What made her think I’d enjoy witnessing a madman strangle the life out of random women by way of out-of-body experiences?
Furthermore, what gave her the hair-brained idea that having a seriously demented serial killer stalk me would somehow be a satisfying pastime?
While you’re at it, ask her why she had to turn up the heat in book 2, Buried Alive, and stick me in a grave to rot. As if she hadn’t put me through enough.Hmph. She’d be furious if I let the cat out of the bag right now and told you how the story ends. Believe me, I’m tempted.
The only reason I won’t is that I’m grateful she gave me a second chance at love with my high school sweetheart, Cole Rainwater. I didn’t think I’d ever see him again.
I’ll confess, from the moment I laid eyes on him after ten, long years, he was even sexier than I imagined. He wasn’t a teenager any longer. He was tall with longer hair than I’d remembered. But when his grey eyes slid over me, I knew he hadn’t forgotten anything. He was pissed that I’d abandoned him, and my heart sank. And I…
Never mind. I don’t want to talk about it. Just chalk it up to another one of Donnette’s torture tactics. At least she’s got that going for her. The art of suspense and all that. Moving on. Now I get the stage. How do you like me now, Donnette?
This is my chance to tell everyone the story she couldn’t be bothered to tell you. This is the tale of me and Cole before that psycho writer lady decided to nearly kill us off. Like, who does that to decent folks anyhow?
So…me and Cole met when we were fifteen years old. I’ll never forget the expression on his face when I turned to stare at him after he purposely bumped into me while me and my best friend Barbara stood in line in front of him at the rodeo concession stand. Yeah, he was smug, alright. So sure of himself. As if nudging me from behind was somehow going to impress me. He asked for my number, and I told him to bite me.
That didn’t deter him. He kept after me the whole night. I finally gave him what he wanted to get rid of him. Okay, okay…so I thought he was a little hot. And I admit, his lopsided grin did this fluttery thing to my stomach.
The next day when he called, I reluctantly agreed to go to a party with him. It was then, on the tailgate of his truck, under a moonlit blanket of stars, that he made his move. He swept a stray curl away from my face and pulled me toward him. I knew when he kissed me, my life would never be the same.
I swear that boy had me from the first brush against my cheek. We spent the next two years together. I can only describe it as heaven. Then Donnette tore us apart when she invented that horrible thing Cole’s father had done. My parents found out and tore me away from the only boy I’d ever loved with all my heart. They took me to another state just to ensure I’d never see Cole again.
Now you know what life was like for me before Donnette threw a wrench in everything.
I shiver to think about what new disaster awaits me in book 3, The Stolen. Donnette isn’t finished writing it yet. But I hear she’s got it all plotted out. I fear what she has in store for me this time might be worse than being chased by a crazed killer, and possibly more frightening than being placed in a casket six feet under the ground. Whatever happened to a good, old-fashioned love story? 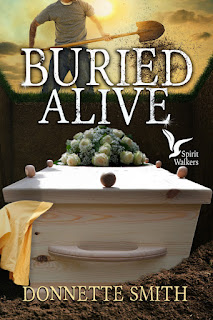 Buried Alive
Spirit Walker Series
Book Two
Donnette Smith
Genre: Paranormal Romance
Publisher: The Wild Rose Press
Date of Publication: 3/14/2022
ISBN: 978-1-5092-4082-1 Paperback
ISBN: 978-1-5092-4083-8 Digital
Number of pages: 250
Word Count: 65,142
Cover Artist: Kristian Norris
Tagline: When your sixth sense speaks, believe it.
Book Description:
As a clairvoyant, Jenna Langley has foreseen her fair share of murder. But the night she is haunted by visions of a woman buried alive in a makeshift casket, nothing prepares her for the chilling reality that the victim she saw in her vision is herself.
Having survived a recent tragedy, and now tasked with the duty of planning her wedding, everyone attributes Jenna’s disturbing dreams to stress. Even her fiancé does his best to convince her she is perfectly safe.
But someone wants revenge and Jenna is the target of that obsession. Her only hope for survival is if her fiancé, Detective Cole Rainwater, can root out who wants her dead before time runs out.
Book Trailer: https://youtu.be/GH_Q-HoniLA
Amazon     BN     Google

At the same time a sharp intake of breath filled her lungs, Jenna’s eyes snapped open. Blackness surrounded her; panic set in instantly as soft whimpers set off a series of echoes. It took a moment for it to sink in the sounds were her own.

Raising both hands, her palms struck a hard object not a foot above her head. She slid her palms over a rough surface, searching, feeling across the top and down the sides of what felt like a wooden crate.

She let go a shriek, crying out in agony, “No! no! please, no!” There was no doubt she was in the very place that stoked the deepest fear in her heart. Just the way her vision forewarned. She was buried alive.

About the Author:
Although not a native Texan, Donnette Smith has spent more than half her life living in the Lone Star State. She is an entrepreneur and former business owner of Tailor Maid Services LLC.
After spending a few years working as a journalist for the Blue Ridge Tribune, she realized her love for writing romantic detective novels. Her stories cover a wide range of genres, from horror, time travel, mystery, fantasy, paranormal, and thriller. But one theme stays the same, there is always a detective solving a crime, and a gorgeous victim he would lay down his life to protect.
Donnette’s biggest fascination is with forensic science and crime scene investigations. Her first mystery/suspense novel, Lady Gabriella, was published in 2008. Her second novel was a horror/mystery/suspense titled Cunja and debuted in 2012.
Her latest released novel, book 1 of the Spirit Walker Series, Killing Dreams is a fantasy/romance story and became available in September of 2021. Book 2 of the Spirit Walker Series, Buried Alive, is soon to be released on March 14, 2022.
https://twitter.com/
https://www.facebook.com/authordonnettesmith
https://www.donnettesmith.com/newsletter.html
https://www.donnettesmith.com/index.html
https://www.goodreads.com/author/show/1866867.Donnette_Smith 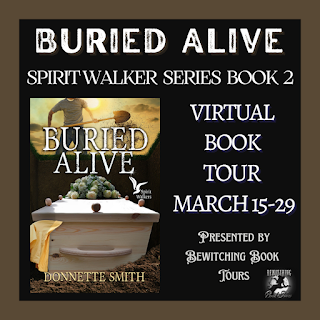 Thank you so much for having me.