Most of the characters in the Legends & Shadows Saga, including Rogue Unbroken, are what are referred to as Legends. They are basically enhanced humans that were created in a lab and now possess extra abilities but need to steal human energy to survive. This comes with its own set of challenges for anyone wanting to date one of these characters.

Not only that, each character is so unique that approaching a relationship with any of them would likely be different for each one. I’m going to list some of my main characters and my top three tips for a person dating them.

Mara/Kate: She is the main character and is a Legend. She used to be a member of the Shadows, which means that murdering humans was a source of entertainment and pleasure for her and the other Shadows. She has since turned a new leaf and is navigating being good while not denying her basic desires. While she goes back and forth between her two names and personas as Mara and Kate, both are strong, clever, witty, and very connected to the people they love.

Tip #1 She wants to be right most, if not all, of the time. That’s not always possible, but the more you can support her, the more she will love and support you.

Tip #2 Don’t lie to her. She can get on board with a lot of shenanigans, but she will not take it well if you choose to lie.

Tip #3 Get ready to ride the roller coaster. Challenges and peril seem to follow her wherever she goes but she’s worth the danger if you can hold on.

Alec: He is the main antagonist of the story. He is and always has been a Shadow. His sense of right and wrong is largely based on what his personal goals are and not what society believes is correct. He has a very singular focus and an astounding determination despite what most people would consider are fatal setbacks. Due to his stubbornness, he is loyal to himself and the people he cares about. There just aren’t many people on that list.

Tip #1 Quite honestly, I would not recommend dating him. Don’t know what else to tell you.

Tip #2 If you have somehow ended up in his sights as a potential romantic partner, seriously evaluate what life choices have led you to this point. Perhaps you’ve made a wrong turn, and then several other wrong turns after that.

Tip #3 If your name isn’t Mara, then you’re a means to an end to get to her. Consider changing your name if you want up your chances of being seen. It probably won’t work, but it couldn’t hurt.

Kylan: He is the main love interest of the books. He starts off as mysterious and charming but turns to be…still quite mysterious and charming. He keeps a lot of personal information to himself. He has very high standards for his behavior and hopes (maybe expects) others to follow the same moral path, which means he very strongly opposes all Shadow behavior. His family are the most important people in his life and he will protect them at any cost.

Tip #1 He is attracted to kindness in other people, especially those that are most in need of it. If you are a genuinely good person toward other people, then you’re off to a good start.

Tip #2 You’d have to get along with his family. They are a bit much to handle at times, but they are his whole world. I suggest making friends with Derek first, since he’s pretty easy to impress. Cassie is the hardest, so put in some real effort there.

Tip #3He may take a while to open up to you. Don’t be alarmed, there are things his own brother doesn’t even know about him. But if you stick around long enough, you’ll get to see all the sides of him and he’s a pretty remarkable person to have in your life.

Nikki: She is one of the main Shadows in the story. She used to be friends with Mara but feels betrayed by her new life choices. Nikki is extremely powerful, vindictive, lethal, and obsessive. Her tattoos are impressive and her long hair is unbelievably gorgeous. She will follow Alec no matter what since she believes he and the Shadows are the closest thing she has to a family.

Tip #1 I don’t recommend dating her either. Seriously, there are plenty of kind people in the world to date. If you can’t find one of those, then there are lots of average people to date. If you’re still striking out, then there is a handful or two of serial killers that offer more warmth and love.

Tip #2 Should you decide to be in a relationship with her, be prepared for pain. She likes seeing it, causing it, or even being around it. It’s kinda her thing.

Tip #3 She’s always wanted to learn to French braid her own hair to really up her style game. Watch a tutorial or two and blow her mind with your skills. She might shred your cells apart where you stand, but she might hear you out first. Either way, it’s your funeral.

Thayer: He is another one of the main Shadows in the story. He is known for being incredibly strong and also good at manipulating emotions. His good looks get him most of the way with people and his powers make up any difference. If you meet him and he wants you to like him, you will. He is learning about personal boundaries but all bets are off if you threaten one of the people he cares about. Since he’s a big teddy bear, that’s a long list of people.

Tip #1 He is kind and loveable and funny and attractive, really the whole package. He does enjoy murdering humans for their energy. He always has. It’s just one of his personality quirks. So if you can get on board with a bit of a gray area when it comes to morals, then he is the guy for you.

Tip #2 Set your boundaries and stick to them. He will definitely try to push you out of them, but will respect you for it all the more when you are firm.

Tip #3 He’s a big flirt. It’s part of his power, but also just part of his personality. If he has chosen you to love, he will be fiercely loyal, it’s true. But you’ll need to turn down your jealousy and just know that your arms are the ones he wants to be in at the end of the day. 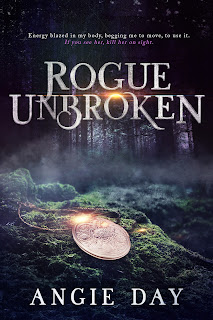 Rogue Unbroken
Legends and Shadows Saga
Book Three
Angie Day
Genre: Young adult, urban fantasy, YAUF
Publisher: Rahne Press
Date of Publication: Dec 10, 2021
ISBN: 978-1-7338144-6-1 (hardcover)
ISBN: 978-1-7338144-7-8 (paper back)
Number of pages: 412
Word Count: 104,000
Cover Artist: Sarah Hansen from Okay Creations
Tagline: Energy blazed in my body, begging me to move, to use it. If you see her, kill her on sight.
Logline: Kate can’t touch anyone without causing pain. To save herself and her family, she must challenge Alec, who is ready to tear her life apart.
Book Description:
Kate had survived. She had lived through pain and torment and now she was on the other side, where all the happiness was supposed to be. But with Alec’s vengeful punishment for escaping him, she can’t touch anyone without hurting them.
Alec still wants to create a Level Five and he’s dangerously close. That power under his control would mean unraveling the world as it stands. The world Kate has not yet started to enjoy. She won’t be able to rest until her body, her mind is fixed, and Alec won’t get his beloved power without her help.
The two warring sides of Rogues and Shadows will have to meet. Kate will have to confront Alec and his cruel ambition once again. But every moment with the Shadows is detrimental to those she loves, especially Kylan. So she must find a way to outsmart the person who taught her everything she knows, the most feared Shadow in the world.
Kate is strong. She survived once. But even the strongest people can break with the right pressure, and Alec is ready to tear her life apart.
Amazon

Alec lifted a hand to my face but lowered it again. “But then you came back to me. You fell for me again. I saw it. If you say you’re done with me, then why can’t you just do the honorable thing and stop loving me?”

Alec looked down at the floor and he never looked so sheepish and small.

A trick. It had to be a trick.

But he was so small and broken and careening in his own mind. I knew what that felt like, all too well.

“I want to.” I leaned back on the shelves again. “You’re despicable and psychotic. You hurt the people I care about. You tortured me, manipulated me—”

“And yet that’s not good enough for you to kill me. All you can do is leave, and I’m sitting here hoping I can somehow get you back.” Alec raised his arms like he didn’t know where to put them anymore. “Why?”

“That’s not an answer. Why?” Alec moved closer to my face.

“Because you won’t let me.”

“Ha.” Alec grinned before his eyes turned dark again. “I wish I had that much control over your decisions. Try again.”

“Because you’re home to me!”

His mouth fell open and the pain created lines around his eyes. I just stared at him for a moment. I saw all the same years of complications that I felt in mine. We weren’t just similar. He and I were mirror images of each other.

“No matter what you do, no matter where I go. When I think back on my life, you are all I can see for centuries,” I said.

“You don’t. You’re a terrible person. You’re the nightmare that just won’t go away.” I looked at the floor. “But you’re also a huge part of my life, whether I hate you or not.”

About the Author:
Angie Day found her love of writing while in college where she studied psychology and eventually went on to a master’s degree. She noticed the need for romantic and fantastic adult stories that were still wholesome and clean. So, she took matters into her own hands.
The Legends and Shadows Saga is her debut series. When she’s not devouring the next book, she is spending time outdoors with her husband.
Website https://www.angiedayauthor.com/
Twitter https://twitter.com/angiedayauthor
Instagram https://www.instagram.com/angiedayauthor/
Mailing List https://www.angiedayauthor.com/contact-angie-day 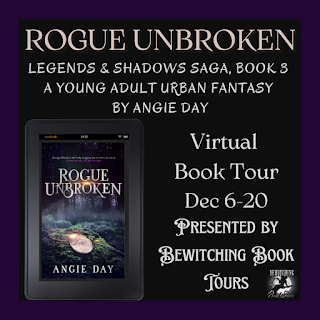 a Rafflecopter giveaway
Posted by Roxanne Rhoads at 4:30 AM