- What is your “day” job if you are not a full-time author?
I don’t have a day job, but once upon a time I was a fulltime freelance writer. There are times when I’ll pick up side work if needed. That can be anything from editing, formatting, graphic design or even yardwork.
- If you wrote a book about your life what would the title be?
“Almost There” might be the best title. I’m always trying to do better and improve myself and life for my family. Also, I forget my age a lot. Just today I found out I’m a year younger than I’ve thought for the last six months. So “Almost There but Not Quite” might be a good title too.
- What is the hardest thing about being an author?
Putting my stories out there. The marketing and the work that goes into polishing is hard, but really putting a story out there is so hard. There are critics and then there is always the chance that no one will read it, which can be harder than hearing from a critic. That fear is always there and is always the hardest to overcome.
- What is the best thing about being an author?
Same as above. When I put a new story out there and hear something great from a reader it’s amazing. Someone besides me likes what I created and enjoyed it. I haven’t found a better feeling as an author.
- Have you ever been star struck by meeting one of your favorite authors? If so who was it?
No, but I would love to. There are a few authors that might leave me a stuttering fool. Anne Rice is a big one I would love to meet.
- What book changed your life?
Interview With The Vampire by Anne Rice. I read it in fifth grade and it was the first chapter book I read. Which sounds weird, but I’m dyslexic and the school I attended treated me like I just wasn’t intelligent enough to read anything beyond a picture book. When I was able to read and give a report on this book I was treated a lot more fairly in my classes. After Interview With The Vampire I moved to more “age appropriate” books.
- What were some of your favorite books growing up?
I read a lot of books by Anne Rice, Annette Curtis Klause and Mary Downing Hahn. Mostly paranormal and a lot of vampires.
- What books are currently in your to be read pile?
A lot, but I think next up is Waiting for an Earl Like You by Alexandra Hawkins and Wicked Nights by Nina Bangs.
- Which do you prefer ebooks, print, or audio books?
I don’t like audio books, but ebooks and print are both great choices for me when I read.
- If you could live inside the world of a book or series which world would it be and why?
That’s a tough one. I think it would have to be the series by Jane Lindskold, Breaking the Wall.  These fantasy books focus on the magic of the zodiacs, but the world clearly includes magics from many different cultures. That seems really interesting and fun to me. 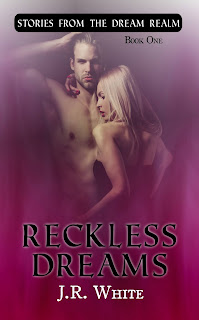 Reckless Dreams
Stories from the Dream Realm
Book One
J.R. White
Genre: Paranormal/Fantasy Romance
Date of Publication: March 15th, 2021
ASIN: B08X2XMNJ7
Number of pages: 265
Word Count: 54,000
Cover Artist: J.R. White
Tagline: Embrace Your Destiny in the Dream Realm
Book Description:
The only thing Karlee Bolt has on her mind is her upcoming beach vacation, but her plans are derailed by dark shadows and a knight with a brilliant, bright light. Karlee is suddenly thrown into another realm and into a battle she has no way of fighting.
A Watcher by right, DjinnShay Court is a warrior that protects the balance between the realms. When the Dreamweaver is suddenly dropped into his lap, Court must change tactics. No longer a warrior that stands between the realms, he must now lead Karlee through the Dream Realm and show her there’s more to dreams than fantasy.
Amazon      Books2Read

Before Karlee could get the next book on the shelf, a loud thunk made her jump. Spinning around to face the disturbance, she took a slow step forward. “Hello?” At first only silence answered her and then a distant click followed by another and then the sound echoed through the disorganized mess. She took another step, but it wasn’t until the lights illuminated the hallway clicked off that she realized what the sound was.

Backing away from the approaching darkness, Karlee turned to run. The clicking of the lights going out behind her grew louder. On the other side of the basement was the door that led outside and onto the street. She ran faster as her heart started to race. As the clicking grew louder and closer, she heard heavy feet hurrying along with it.

The lights directly above Karlee started to shatter. Sparks cascaded down on her and bounced across the floor. Making a quick turn, she could see the door just a few yards away, but just as she was closing the distance, she felt something tug at her hair. Letting out a shriek, she dashed towards the steps that led away from her tormentor. As one foot touched down on the stair, the other was yanked out from under her. She crashed into the wooden steps and felt a cold solid mass wrap itself around her ankle. It began to slither up her leg and she kicked out, desperately trying to clamber away.

There was nothing but darkness behind Karlee. Even the thing that held onto her and was scratching at her skin seemed to be made of shadows. She screamed as she felt the first hard tug. Reaching up, she grabbed the edge of the top step and held on. Another hard tug jerked her, nearly ripping her away from the relative safety of the stairs. Just when she thought her leg would be torn off, the door above her burst open and she was blinded by a brilliant flash of light shooting through the darkness.

“Be gone, shadow spawn!” a deep voice boomed, and Karlee felt the thick shadows jerk franticly away. Scrambling up the steps, she saw the shining man who had saved her and ran straight into his arms. A strong arm wrapped around her and she found herself tucked against the man’s side.

From beside the stranger, Karlee could see the source of the brilliant light. It radiated from a small stone he held in the palm of his hand. Beyond him, she could also see the illuminated darkness left in the library basement. The light allowed her to see the collection of books and the wreathing shadows that had chased her. Misshapen human shadows were wriggling in the light as if it was burning them. Staring at it, she felt fear rake over her, violently sending her heart into her throat and blocking the scream she couldn’t seem to conjure.

The man slammed the door, hiding the horrid sight from Karlee and in one smooth motion, took her hand and turned towards the road. “I have to get you out of here,” he said as he started to pull her away from the library and down the sidewalk. 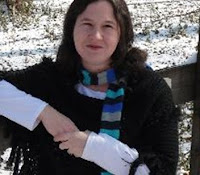 J. R. White has been telling stories for as long as she can remember. After her marriage in 2008 she found the freedom to dive headfirst into her personal world of fiction. Currently she lives in the Upstate of South Carolina with her family, where she fills her daughter’s head with fairy tales. 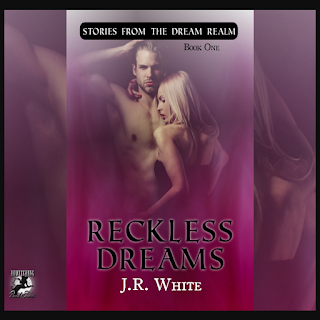 Interview with a Vampire was my life-changing book as well, though for different reasons. It is what hooked me on vampires and paranormal fiction.

I would love to meet Anne Rice. She's the only one of my favorites that I have not met yet.

A lot of paranormal fans say that book changed their lives. I think Anne Rice helped create the paranormal romance genre as we know it today.