In my book, Holy Crap! The World is Ending!, the main character, Autumn, and her best friend, Emma, are obsessed with food. I am talking rehab-level obsessed. I thought the Twelve Days of Christmas could use a little remake, especially for food lovers like me, so I came up with the Twelve Days of Food. I hope you enjoy! And, if you are like me, you are going to be craving pizza right after you read this. 😁🍕

Give it a go and sing it out loud. You know you want to!

What is on your Twelve Days of Food list?

Holy Crap! The World is Ending!
How a Trip to the Bookstore Led to
Sex with an Alien and the Destruction of Earth
The Anunnaki Chronicles
Book One
Anna-Marie Abell

Tagline: End times are here! Now you can eat whatever you want and not care if you gain weight.

The president has announced that Earth is going to collide with a rogue moon, and in the process, our entire planet is going to be smashed to bits. As one would expect, upon hearing this news, humans went ballistic. It was as if every sports team in the world lost their championship game at the same time. No car was left unrolled—but oddly enough, Taco Bell remained open and made unfathomable profits in the last days. Apparently, Doritos Locos® Tacos were a popular last meal.

Autumn (who for the purpose of this retelling asked to be portrayed as drool-inducing hot with kick-ass ninja skills) has just been handed the task of saving all of humanity. With the help of her unbelievably sexy alien boyfriend and her kleptomaniac friend with fire-retardant hair, Autumn takes a spaceship and races to save her fellow humans by using the Ark of the Covenant. Along the way, she discovers how sheltered people are from the truth of extraterrestrials and their power to either protect us or destroy us.

Grab a bottle of wine, a shipload of snacks, and prepare to take a ride on this humorous chick lit romantic sci-fi paranormal adventure. If you’re into Ancient Aliens, conspiracy theories, UFOs, crave a little sexy time in your reading, are curious if we were genetically engineered (like the Sumerian cuneiform texts claim), and are dying to find out the meaning of life, then this book is for you.

What Reviewers Have to Say

"An unexpected story that promises to be one of the most creative fictional discoveries of the year...a fun approach to the entire save-the-Earth-from-alien-invasion scenario which successfully turns traditional approaches upside down."- D. Donovan, Senior Reviewer, Midwest Book Review

"A rollicking seat of your pants fun ride through the universe!"- Joan Silvestro, Booktrader of Hamilton

"An awesome read! Warm, witty--and thought provoking--a beach read that stays with you throughout the year!"- Aionios Books

"This book starts with a lot of humour, but quickly gets a very rich storyline with great characters and seriously... this ending? If you like to be blown away, you should read this!" - Esther, BiteIntoBooks

"Anna-Marie Abell has succeeded in weaving her years of study into in the ancient Sumerian culture and their gods with common conspiracy theories, pop culture and random human quirkiness into an out of this world end times romp that will have you laughing out loud at the most inappropriate times and possibly even shedding a tear or two before it's all said and done." - Jennifer, JennlyReads

What if...
Ever since I was a kid I’ve been fascinated by the unimaginable. I used to gaze at the night sky and contemplate a series of what ifs. But I’m not talking about the boring typical what ifs such as:
What if I won the lotto?
What if I quit my job and moved to Tanzania?
I’m talking about those outlandish ones:
What if I ran across a herd of three-inch pigmy cows capable of producing solid gold milk, but each ounce I extracted took a month off my life? Would I still do it?
What if we could suddenly have intellectual conversations with all animals? Would we continue to eat them?
What if the whole world went blind and deaf all at the same time? Would we survive as a species?
Another favorite childhood pastime of mine was observing ants clambering atop one another to locate food or gather leaves, like inhabitants of a metropolis bustling to work. Ants are innately oblivious to the threat of a gargantuan foot looming over them. I’ve often wondered if humans would behave the same way if the tables were turned.
What if a jumbo foot came down on us and squashed a city block on a regular basis? After a while, would we just shrug it off and alter course to go around it like ants do?
Some people go out of their way to squish any and all bugs that come across their path. Not me. I have a strict “no kill” policy with every type of animal.
Well, that’s not entirely true. I have an exception for animals I buy in a grocery store. I know: this is incredibly hypocritical. But dammit, I love me some cow. Perhaps I should define my “no kill” policy as “not slaying a creature simply because it annoys you—or simply because you can.”
For example, I can’t help but wonder:

What if I were reincarnated as a fly in my next life? Would I appreciate getting stuck on a glue trap?
Put yourself in the fly’s place. You’re ambling along, minding your own business, when out of nowhere the glorious aroma of In-N-Out Burger wafts in your direction. Those freshly cooked fries and juicy burgers fill your senses with food ecstasy. Just when you can’t take it anymore, a sign pops up out of thin air that reads: All You Can Eat! Free In-N-Out Burgers All Day.
Salivating, you charge toward the smell all excited. Then—BAM!—you step onto a glue pad, unable to break free. Not only are you doomed to a lengthy, torturous death of dehydration and starvation, but your last days are filled with the constant aroma of those heavenly cheeseburgers you can never have.
Not the way I’d want to kick the bucket, that’s for sure.
My fixation over these what ifs is why I was so into UFOs, ancient aliens, near-death experiences, ghosts, and really, anything paranormal. Truth be told, I’m not sure if deep down I believed in all these things, or if I just wanted them to be real, so I’d have something to hope for beyond the monotony of human life. I mean, think about it. What would be more entertaining: cleaning a toilet, or cleaning a toilet haunted by a ghost? (Well, a friendly one. It might get messy if your bowl were possessed by a demon.) Phantom commodes win hands down.
I’ll never forget the day this whole obsession got started. When I was six, I asked my mom what life was going to be like when I grew up. She was always one for blunt honesty, and she said, “Well, you’ll go to school for a really long time, marry a guy who will lose all his hair, get a job you’ll probably hate, have kids, get old, poop your pants, and then die.”
I broke down in tears.
My mom ended up regretting having told me all that, because at the age of seven, I convinced myself that those things wouldn’t happen to me, and that it was my destiny to one day rescue the planet. I am talking about a Will Smith in Independence Day style rescue (except I imagined myself with a breadstick in my mouth instead of a cigar). In one childhood fantasy, I used a butter knife and my badass Barbie Mobile to defend the residents of my neighborhood from a rampaging, genetically mutated, alien-giraffe hybrid that had escaped from a secret government lab. (Kids, if you ever want your mom to get fired as the president of the PTA so she doesn’t embarrass you in front of your class, simply splatter your shirt with ketchup and burst into the annual Teacher Appreciation Luncheon with a spork screaming about man-eating giraffes. Trust me, it works like a charm.)
This desire to be the hero had me hooked on stories where people discover they’re part of an amazing new reality—a world where the impossible becomes possible. If I waited long enough, I thought, maybe Hagrid and his flying motorcycle would come crashing into my bathroom as I sat on the toilet and proclaim, “You’re a wizard, Autumn!”
But it's one thing to dream it, and an entirely different thing to live it. Had I been smart and heeded the advice of the Pussycat Dolls when they warned us to “Be careful what you wish for, ’cause you just might get it,” then maybe things would have played out differently.
I wished it.
I got it. 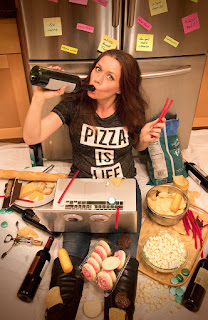 Anna-Marie Abell grew up in a trailer park. Well, several actually. Her trailer was on wheels so she got to experience the Pacific Northwest’s vast array of mobile home parks as her parents moved her from one to the other. Somewhere along the way, she got totally into UFOs. Probably because she was hoping extraterrestrials would come and abduct her. But they never did. Luckily for her she was smart, because her only hope of escaping trailer life was college and a full scholarship. Moving to sunny California on her almost full ride to Chapman University, she was well on her way to her new life. Two bachelor degrees later (Film and Television Production and Media Performance), and several honors and awards for her accomplishments, she managed to start working in an almost completely unrelated industry from her majors: infomercials.

It was in college that she got bit by the “ancient alien” bug after listening to Zecharia Sitchin on Coast to Coast AM. In her pursuit to uncover the truth, she has spent the last twenty years researching the ancient Sumerian culture—in particular their “gods” called the Anunnaki—and their connection to the creation of the human race. What she found changed her life, her beliefs, and her understanding of the universe and everything beyond. Her humorous science fiction trilogy, The Anunnaki Chronicles, is a culmination of all her research, her borderline obsession for all things paranormal, and approximately 2,300 bottles of wine. 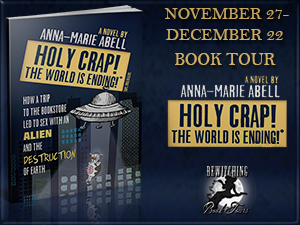